Like the Rhythm, Edge is Going to Get You 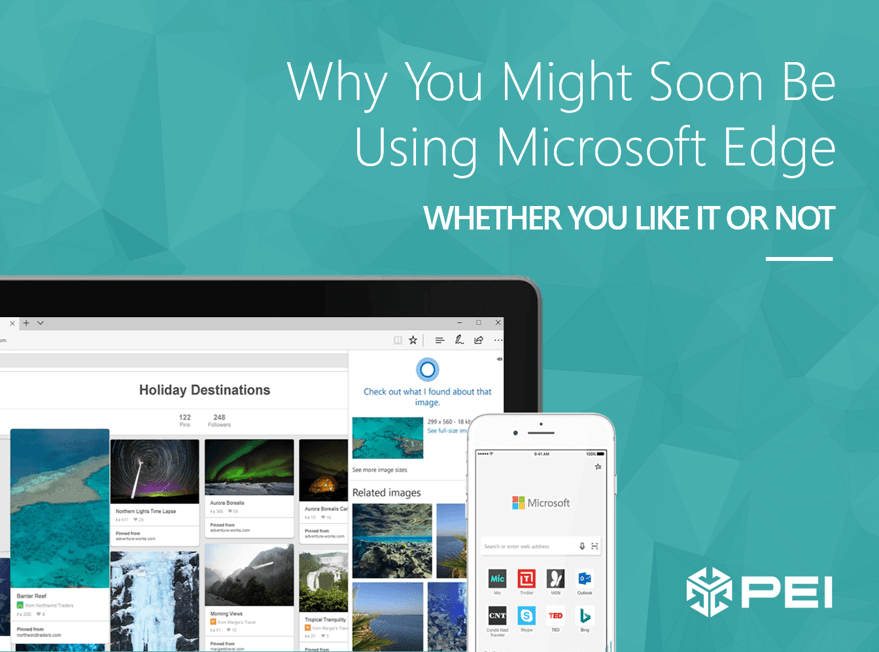 Microsoft’s Edge browser gets no respect.

At the time of this writing, it’s still sitting at about 5% market share, meaning only one in 20 people use it as their default browser—and virtually all of them are either running Windows 10 S (see below) or lack the tech savvy to change their browser to something, anything, else.

And yet. Microsoft clearly has plans for Edge.

Let’s look at some of the tea leaves. And keep in mind, this is just what’s publicly observable. We don’t have confirmation from Microsoft that this is where they’re going with Edge, but see if this makes sense.

Since the debut of Windows 10, tapping the Start button and typing a search query, or asking Cortana, has always searched with Bing and opened the results in Edge. There is no way to change this. It doesn’t matter what your default browser is set to, Start searches come up in Edge.

In recent Insider Preview builds, links clicked in the Windows Mail app, the one installed with Windows, open in Edge. There is also no way to turn this off. If you want to open links from email in Chrome, you have to install a different mail app, like Outlook or Thunderbird.

Speaking of Windows Store apps that ship as part of Windows, several of these have been canceled or frozen recently. The developers working on apps like Stocks and Weather were all offered spots on the Edge team instead of continuing to work on other Windows apps. (Most of them refused and moved to other jobs at Microsoft.)

Edge is the only browser (sort of) allowed in Windows 10 S Mode. For those of you who haven’t heard much about S Mode, this is a “locked down,” streamlined variant of Windows that disallows things like Win32 apps and drivers. It’s limited to running apps from the Microsoft Store and web apps in Edge. (Technically, you can run any browser in the Microsoft Store, but a condition of having a browser in the Microsoft Store is that it use Edge’s rendering engine, meaning they’re basically all Edge with different clothes on.) S Mode gives Windows the battery life and reliability you’d expect from Android, ChromeOS or iOS because you’re only ever running apps that are already vetted as well-behaving and cooperative with Windows’ efforts at managing system resources. It’s an attractive idea if you can get away with just web apps and Microsoft Store apps, but not everyone can.

Speaking of which, web apps and Microsoft Store apps are becoming the same thing. One of the big features in Windows 10 1803, due this spring, is the ability to run what are called Progressive Web Apps (PWAs). The first big one is Twitter. In Windows 10 1803, the Twitter app from the Microsoft Store is effectively identical to what you’d get if you opened Edge and went to https://mobile.twitter.com, with a few minor differences, like the ability to use Windows notifications in the Action Center and jump lists if you have it pinned to the taskbar. PWAs allow people to use extensions called service workers to repackage a web app to use local OS features. Microsoft themselves are putting hundreds of the best PWAs in the Microsoft Store, regardless of who makes them, and they will look, run and act like native(ish) apps on Windows. They’ll run in their own windows, support rich notifications and features like live tiles in the Start Menu.

And PWAs all use Edge as their rendering engine. They’re all Edge under the hood. Going forward, most of the apps available on Windows will be based on Edge.

In the next version of Windows, currently called Redstone 5, Microsoft is introducing a new feature called Sets. With this you can put almost any app into a tabbed window with any others, keeping everything you need for a specific task or workflow in a single window and tabbing between them like you would in a browser. You can have Word in a tab, Excel in other, Notepad or Powershell in a third. And in Sets, Edge tabs sit right alongside app tabs, further blurring the line between an app and a website. Your daily productivity window might be Gmail, Excel, Skype for Business and Google all open in their own tabs, a trick you won’t be able to do with Chrome or Firefox tabs (Sets currently only works with apps that don’t customize the title bar much, and virtually all browsers replace the title bar with their own tabs.).

What’s Next for Edge?

So where is all this going? When Microsoft CEO Satya Nadella recently announced Microsoft’s strategy going forward was “Intelligent cloud, intelligent edge,” it was understood that by “edge” he meant the human-facing, input/output “edge” of computing. Windows is part of that edge, but so are things like Internet of Things smart devices and mobile. I thought it was weird at the time that Edge was also the name of their new standards-compliant web browser to replace Internet Explorer. But now I’m wondering if that wasn’t the point all along.

It’s said that if your only tool is a hammer, everything starts to look like a nail. And to Microsoft, when your primary focus is the cloud, the edge starts to look like a browser. We’ve already seen this way of thinking with Google and ChromeOS. And no one questioned it then. To Google, making the browsers essentially be the operating system made sense. And I think Microsoft is coming around to the same way of thinking. Sets in Redstone 5 makes Windows, especially Windows in S Mode, which will now be available not as separate version of windows alongside Home, Pro and Enterprise but as a mode of Home, Pro and Enterprise, something a lot less like Windows as we’ve traditionally understood it and more like EdgeOS.

So get used to Edge now. You’re going to be using it a lot, and sooner than you think.