Out With The Old and In With The New: Why You Need To Say Goodbye To Deprecated Software 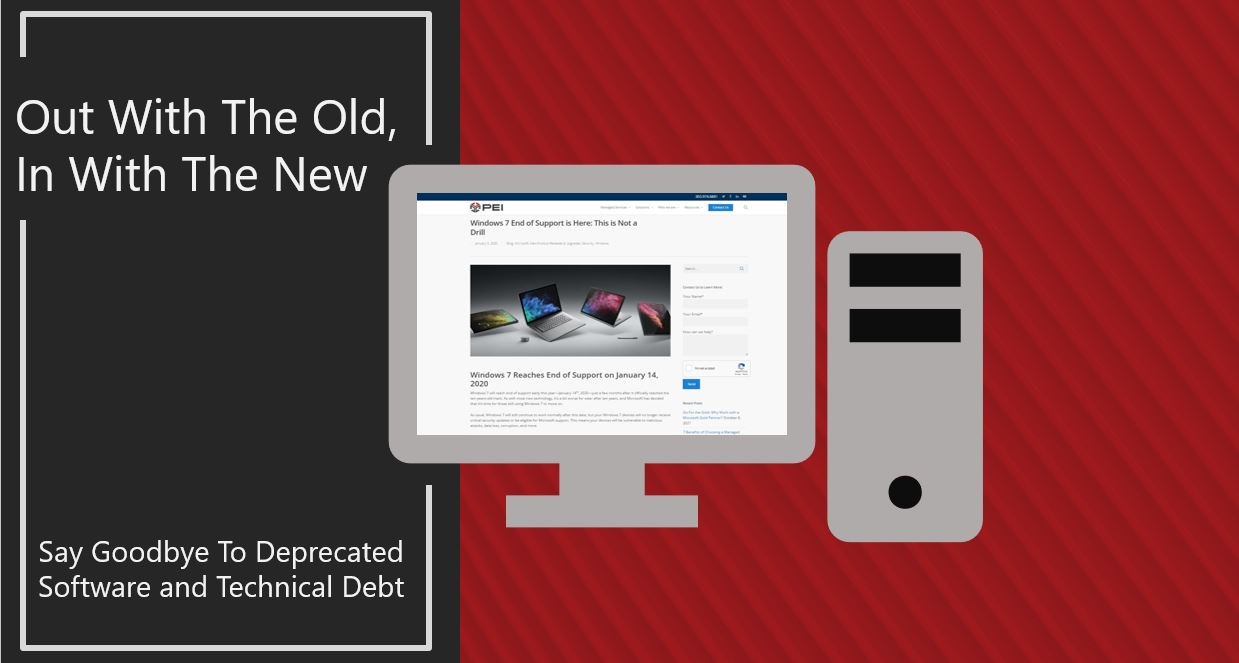 What Does It Mean to be Deprecated?

Do you know what “deprecated” means? If you’re not a programmer, you might not, but it’s important to anyone involved in IT (and that includes end users). When something is deprecated, it’s still active and it still works, but it’s being replaced by something else or being done away with entirely. If you are using deprecated software, you should stop using it as soon as possible and definitely don’t start using it for anything.

A good example of this is Windows 7. Existing PCs running Windows 7 can be used today, but we see far too many of them considering Windows 7 is deprecated. Microsoft no longer supports it unless you pay them specifically for the updates, and those get more expensive every year. By 2023, Microsoft won’t even provide security updates for Windows 7. If you still have any Windows 7 PCs in your organization, you needed to update those to Windows 10 like, yesterday. It’s all too easy to keep using deprecated software until it’s impossible to get security updates. But, using deprecated software without proper security leaves the door open to every hacker on the planet.

If you’re still not convinced you need to update deprecated hardware and software, read what happened when a company ignored end of support warnings.

Technical Debt and How To Avoid It

Continuing to use stuff that has been deprecated is called technology debt. Technically, “technical debt” is another software development term that refers to the cost of reworking your code later because you used a quick and easy fix now instead of putting in the time and effort to come up with something better. Running with deprecated software is one of those quick and easy fixes. After all, nothing is easier than doing nothing.

It’s relatively easy to upgrade from Windows 7 to Windows 10 now, but I’ve seen some companies that aren’t so lucky. Those companies still have PCs in their organization that run Windows XP. It is impossible to upgrade a PC from Windows XP (released in 2001, almost two decades ago; that’s centuries in IT time) to Windows 10. Windows 10 simply doesn’t support that as an upgrade path. Windows XP is also long out of support from Microsoft. So before (not if) these PCs die, folks need to manually reinstall the apps and move the data from one PC to another. This is a time-consuming, labor-intensive process that could have been avoided if the PCs had been updated to Windows 7 years ago, and if the hardware was fast enough, to Windows 10 today. Spinning hard drives die eventually. Every PC is on borrowed time.

Windows is not the only example, but a prominent one considering the rage of software and operating systems they offer. Is your organization still using Office 2013? Office 2010? Those are also ticking clocks. What makes software different from hardware is that software decays a lot faster. The sewing machine your great grandmother bought a hundred years ago might still work today. Similarly, PCs from the turn of the century might still work fine, but only if they’ve been maintained and had parts replaced along the way. Software has bugs, and bugs become exploits. Keeping your software up to date is just part of using any software. And the choice is to pay a little now or pay a lot later.